On December 18, 2018, HYB was invited to participate in the “invigorating the Oriental tide and advancing the new era” to celebrate the 40th anniversary of the reform and opening up theme promotion activities. Xia jie, chairman of the board of directors, was honored as the thumb up of the motherland in Nasdaq, New York, representing the big health industry to show the image of Chinese enterprises to the world.

In 1978, the third Plenary Session of the 11th CPC Central Committee marked the beginning of China’s historic journey of reform and opening up. From rural to urban areas, from pilot to extension, from economic restructuring to comprehensively deepening the reform… Over the past four decades, the Chinese people have written with both hands a magnificent epic of national and national development. Reform and opening up, China’s second revolution, has not only profoundly changed China, but also profoundly affected to the  World ! 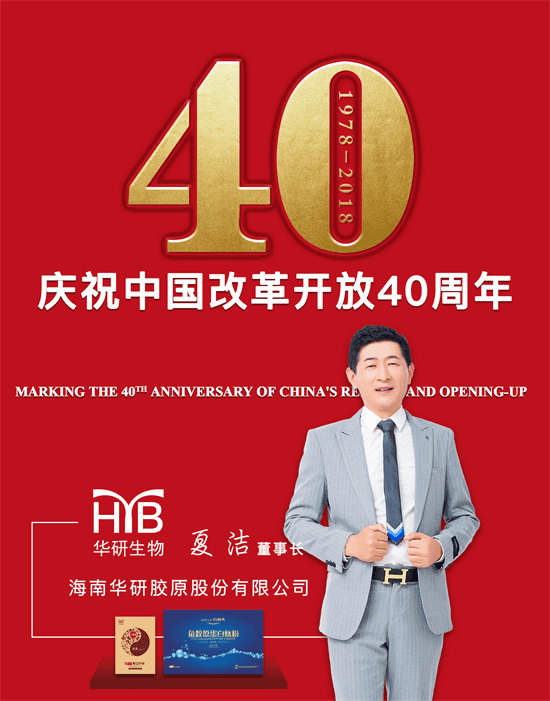 In the past 40 years, Chinese enterprises have really started to go out and get in line with the international standards. A large number of Chinese brands have realized globalization through their own efforts, and HYB has gradually become a well-known brand in the national industry.

In recent years, Huayan Company has undertaken a total of 11 national, provincial and municipal R & D projects. So far, it has obtained 9 corresponding technical research stage or final results, with a conversion rate as high as 82% and an average annual conversion rate of 3 projects. Company of the national invention patent “a high aspect ratio flies vivid skin collagen enzyme mutation system, such as the construction of column, pichia expression plasmid and strain screening and purification methods” (patent authorization number zL201210141391. X) one, make the company’s main products isinglass proteins on the basis of the original patent technology, and using the patent technology of enzyme – skin flies collagenase, produce certain molecular weight of collagen protein, with the same industry in a leading position in the competition on the international.